A couple of questions by a concerned parent

I was recently asked a couple of questions, by a concerned parent and thought it was worth spending some time and answering the question in a rational and constructive manner. The first question was does computing stunt a childs creativity; the second was do children become addicted to computers. It would be all too easy to suggest that the parent is worrying unduly, but to disregard the questions, wouldn't be constructive in my opinion.

Does computing stunt a childs creativity

Before constructing a response I searched Google to see what parents might find on their own:

and the list of conflicting stories and to be honest a liberal sprinkling of scare mongering continued the further you delved into the bastion of truth: the internet.

So, lets try and take a more measured approach to a serious question from a concerned parent.

Children these days are raised in an environment where Information Technology (IT) surrounds both parents and children. Children will inevitably need to have a firm grasp of IT as they go through school and into their adult lives, so to prevent a child from using IT would be wrong, as it would disadvantage them in the long run.

My personal opinion, would be to encourage tradition playtime in the early years (certainly under 5 years of age), before introducing selected devices for children to use as they get slightly older. I was talking to a pub landlord the other week, who owns a traditional pub on Dartmoor The Rugglestone Inn and he recalled a story about a young family. As the parents and two young children (under 10) walked in, the kids asked if they could have the WiFi key (enabling them to connect to the internet). Richard explained that there wasn't any mobile signal or WiFi available, much to the disappointment of the children. When the parents settled up their bill they said thanks, that was great, without access to the internet our children actually sat down and really enjoyed a traditional meal out and we loved it! 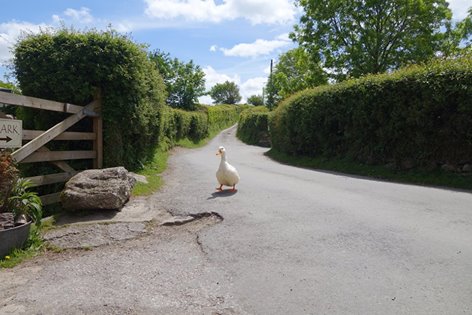 The Rugglestone Inn nestled in Widecombe on Dartmoor

I would advocate the sentiment put forward by The Huffington Post that advocates an awareness of how much time your children spending using various devices including gaming consoles, computers and especially the internet. Creativity comes from all areas of a childs life and whilst I am not pretending to be an expert in child welfare, I am a parent and grandparent, so can relate to a parents concerns. Children are like sponges and can pick up experiences far quicker than their parents; children can learn languages far quicker than their adult counterparts, so removing experiences, what ever they may be seems counter intuitive.

Do children become addicted to computers

Once again I started where any parent would potential start and checked out what a quick Google search returned:

the difference is, there isn't any debate about the potential addiction, it's all advice on how to prevent it. It's a phase for most children, although there are just as many adults (usually under 40 years old) that play computer games. 91% of children play computer games, with 50% of adults playing games (although this drops off the older you are).

Whilst there is little doubt that gaming and the use of computers is addictive, there's a lot more ambiguity around the effect on a child's creativity. As with all things in life, it's about balance. My grandmother used to call the television the electronic nanny and would happily let us watch TV so that she could get on with other tasks. For many parents these days, computers and games consoles have become the electronic nanny of today, but with ever increasing pressures on parents work / life balance it is all the more important to be aware of how much screen time and what your children are actually accessing when using computers and gaming consoles.

We seem to be doing well with bookings! Thanks for you support :-)