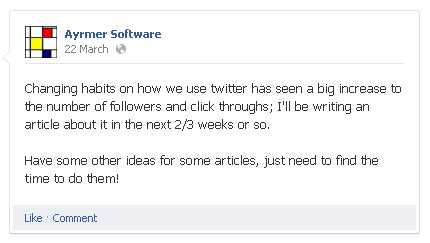 I recently said (22nd March) that I would explain a post I put on our Facebook page, about how changing our habits on social media " especially twitter " has seen a marked increase on the number of followers we have gained. I was further prompted to write an article about how we use twitter by one of our clients yesterday. I do not pretend to be a social media guru as I abhor that term, but simply explain what we have done and pass it on to other twitter users and hope it helps their businesses in understanding how to use social media (but specifically twitter in this article).

Firstly, I would like to say that I have picked up tips and tricks from numerous places "far too many to mention and / or remember " since I started using twitter in November 2009. I would also suggest that the way we " as a business " use twitter has evolved over the years, but one change recently has made a big difference across the board. The most obvious measure are the number of followers we have, but that is rather egotistical and pointless, unless you can convert it into real business (although this is more difficult to determine and a different article in itself, keep in mind).

People often talk about engaging on social media and clients often ask me what that actually means. Well, in short it means interacting with other twitter users, joining in conversations, retweeting, commenting or quoting on other peoples tweets. Why would you do this? Well, if you have say 200 followers unless you are using hash tags most of the time only your followers will see what you are talking about. By interacting with other twitter users you increase your reach substantially, because the followers of the other twitter account then see you. If what you have to say is interesting, the chances are people will then follow you.

Use hash tags far more often; a good example is #ff which stands for follow friday and is designed to allow users to suggest who others users should follow. I have started explaining why I have included people in my #ff as this gives others users some context (see example below, although perhaps not the best example as it was the Friday after the Easter break). 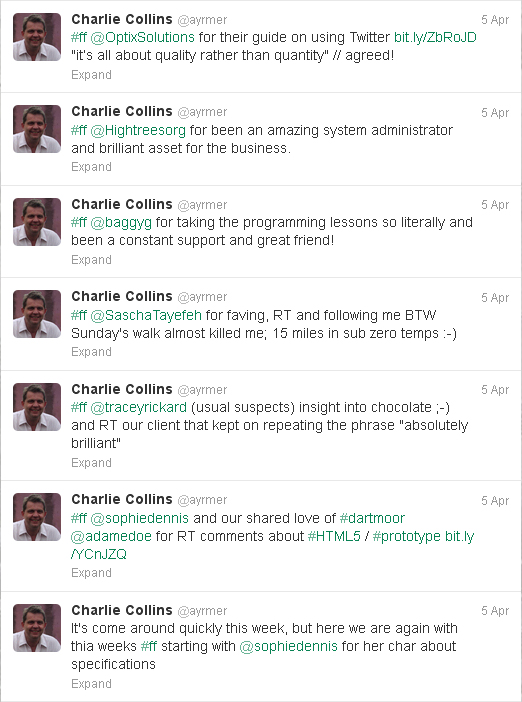 I use the Interactions from the past week to determine who gets on my #ff as thus is a useful reference point and makes sure I get the context of previous conversations / interactions right.

I use hash tags to identifying specific topics and tweet about subjects other than business; I regularly walk on Dartmoor National Park (as its on my door step) and post photos of recent walks using the hash tag #dartmoor that has attracted a number of new followers. 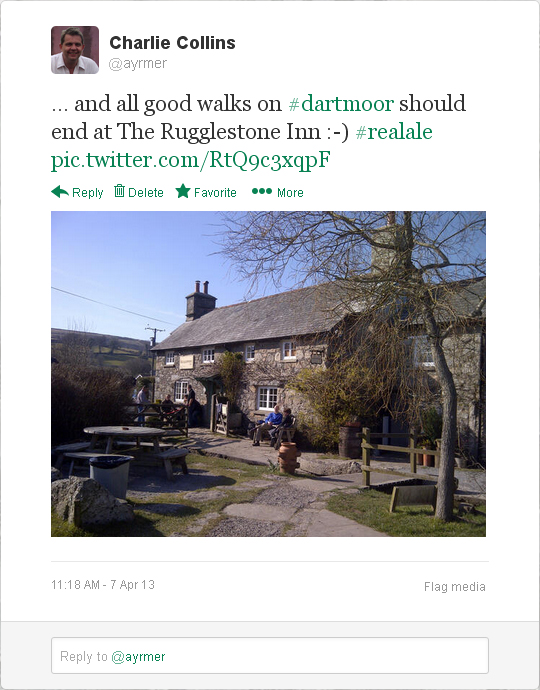 We have also, more recently started a theme within some of our tweets; we have tweeted lessons about programming that has sparked off a number of conversation between our peers. Although this started off as a bit of fun one Friday afternoon, we have continued to build on it and will continue to do so.

3rd lesson: go commando and put the mouse away http://bit.ly/YIlywY

4th lesson: always write pseudocode, before you start programming and then leave it in as /*comments*/ #bestpractice #pseudocode

6th lesson: it isn't the number of lines of code you write, it's how few you right to achieve the same thing!

7th lesson: it is more efficient to debug source code by reading through it, as opposed to randomly debugging it via the user interface.

8th lesson: use consistant naming conventions; variable nameing, use either noun/verb (doorOpen, doorClose) or verb/noun (openDoor, closeDoor) etc., If you get this right a team can work on a project successfully #HungarianNotation

12th lesson: lift your head above the source code and make sure you review the user experience. All too often programmers and developers focus so much on the code they forget the user!

13th lesson: don't use other peoples classes (from the web) without thoroughly testing them first as they invariably have bugs in them.

14th lesson: test your applications with real world data, so that you can be confident it will work with larger datasets.

These are the extended versions that we posted via our Facebook page, but based on the shorter version on twitter. The 4th and 5th lessons generated a lot of conversations in particular.

Hopefully, it goes without saying your tweets have to be of value to the recipients, otherwise no one is going to be interested in what you have to say (see below)!

As someone said the other week, it's quality not quantity, so keep your tweets interesting and as the old adage goes, givers gain!