We all make mistakes

We all make mistakes and I believe in sharing them, so that others do not fall into the same trap. I recently started using Google Adwords Express to promote a product and set-up a small campaign with a limited budget to see how it went. I was contacted by Google a few days later, who suggested that I should set-up a Google Adwords campaign and they offered to do this for me. Well, never look a gift horse in the month (I thought), as who better to set-up your campaign than Google themselves.

So, after verifying who they were, we discussed the product, target audience and keywords and off they went. A couple of hours later they asked me to shut down the Google Adwords Express campaign and turn on the one Google had built, which I duly did.

The Google representative said that she would follow up to see how the campaign was going in a months time, confident that we would be deluged in enquiries, as she said we had an excellent product that she said would do well.

So, after 24 hours I logged onto the campaign to see how things were going ....

Initially I was pleased; who doesn't want to see their business get in front of over 5,000 people? But, when I started looking at the search queries people had used, I quickly realised that whilst I might get some benefit the biggest winner was Google themselves. So, I started tweaking campaign and removed negative keywords so that the campaign was directed at wrap around childcare providers (our target audience) rather than parents looking for help / advice on childcare vouchers or trying to find a provider. 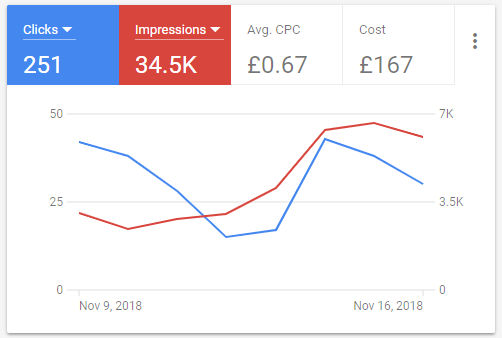 The effect was almost immediate and the impressions / clicks dramatically dropped as the target audience was now far more defined. So I moved onto other things to let the campaign run, keeping an eye on it everyday, removing any keywords that were not applicable and that is where this story should have ended ...

Earlier last week I was contacted by one of Google's Premium Partners that said they could improve my campaign and urged me to have a 30 minute demo to show me what they could do. I was busy, so initially said I did not have time, but they badgered me and eventually I said yes. At the appointed time they contacted - having contacted me twice with the 12 hours leading up to the appointment - and I was handed over to one of their Google Adwords specialists.

He showed me where I was wasting money on placements and said he could fix it, so I said go on then. He then attempted to close me in the most ham fisted, aggressive manner I have ever had the experience in 16 years of running my own business. The call ended when he refused to provide costs and I said I wouldn't sign up until I had them.

I have since contacted a trusted business colleague, who is also a Google Premium Partner - Optix Solutions (based in Exeter) - who will be running our Pay Per Click (PPC) campaign for us from today.

So, what did this all cost? Well in reality, not that much (around 350) and I think that is great value to relearn an age old lesson of using your network to find trusted colleague that can provide a top notch service. It's what NRG Business Networks was founded on (a long standing client, who we developed a booking system for back in 2006)!