I was recently given the opportunity to attend a conference at Google's offices in Central Saint Giles and jumped at the chance having never been there! During the conference " predominantly attended by information technology businesses and people related to the sector " I used twitter to post a number of comments using the conferences hash tag #innovate as did a number of the participants. Dan Cave @dancave picked up on my tweets and suggested I write an article of on blog, so here I am!

Bits and Billions: A blueprint for high-impact digital entrepreneurship in the UK

Firstly, thanks to Dan as it hadn?t occurred to me, but made complete sense as soon as you suggested it. I read a paper that Policy Exchange published in September that looked at the challenges the Information Technology (IT) sector face and considered how government policy could enable the sector to become a world leader and the drag the United Kingdom out of recession. No pressure on us geeks then; just jump into the vacuum created by the banking crisis and the collapse of UK plc profit margins; after all prior to 2008 the city was responsible for around 25% of our Gross Domestic Product (GDP) and has seen a significant drop over the last four years.

When I initially read the paper, it suggested six pillars to building a high impact digital entrepreneurship: "

I am not going to bore you with the detail, but feel free to read the paper Bits and Billions.

Innovate to survive: how to change the future.

The conference " Innovate to survive: How to change the future? " was sponsored by Google and organised jointly by IPRR and Policy Exchange. As I left the conference, I had to laugh when one of the participants asked his colleague if he was claiming expenses; his response was funded it myself, wasn't going to miss out an invite to Google, was I? The power of Google and the reason Dan had picked up on my tweets, he is after all a Search Engine Optimisation (SEO) Specialist " and a very good one I might add " and was no doubt slightly miffed when he saw where I was (Dan, it isn't what you know, it is who you know)!

The conference was opened by Matt Brittin (Google VP Northern Europe) and he gave us a history lesson, running through innovative individuals who have contributed to the Internet (and other things) from Great Britain, kicking off with he Olympics opening ceremony and referring to Isambard Kingdom Brunel. One really interesting point Matt Brittin threw in was that Google now see 25% of all searches on tablets and smart phones.

The first speaker that caught my imagination was Amy Carter (Cancer Research), who talk about the Galaxy Project and how a community was able to find a new galaxy, despite NASA saying that there were no more to be found. She then went on to explain how the collective power of people " a.k.a. the community " speeds up cures for cancer (seeclicktocure.net).

Stephen Shakespeare (YouGov and Data Strategy) talked about how to share and access data touching upon the latest idea to come out of the ICO. Interestingly he mentioned that The Land Registry are turning a profit, which did make me smile as I know they have laid off large numbers of staff. Although, as he rightly said the amount of work isn?t out there in the current climate, but one wonders if they would be making a profit if they had not slashed costs.

Jude Ower took the stage as one of the members of the panel applying innovation and imagination to the UK'[s big policy challenges with Nadhim Zahawi (MP) who suggested Business Link was too expensive; do you really want me to comment? Again I wonder what business portal they will come up with next and just how much they (the government) are prepared to fork out.

The next session was brilliant! How is the internet changing the skills that business need? there's a serious question. The panel consisted of Juan Mateos-Garcia (Nesta), Kathryn Parsons (Decoded) and Jemima Kiss (Guardian). Kathryn and Juan spoke with real passion. Did you know that Only 32 students in Tower Hamlets took A Level ICT based courses; this is the home of the governments pseudo Silicon Valley better know as Tech City! Kathryn's business tries to break down the barriers between coder and business teaching people how to code in 24 hours; hang on, before you get excited we are only talking about HTML here, but digital enlightenment " as she termed it " has to be a good thing.

There was one session in the afternoon that was as entertaining " How can the Internet play a stronger role in delivering skills and education? " and Professor Martyn Poliakoff was truly inspiring opening with my worst nightmare was presenting at a conference @ Google and went on to tell us about The Periodic Table of Videos (University of Nottingham) and about some of their biggest fans.

The last session should have been brilliant but wasn't! Small is beautiful and had speakers including Dr Stella Creasy (MP), who was the highlight of a pretty disappointing session.

So what did I take away from the conference ?

1. The challenge of how to distribute and interpret large amounts of data (terabytes) remains a barrier to innovation.
2. I hate to say this, but government and the think tanks have NO idea!
3. The people who really drive our economy forward are not in government; they are out there trying to build businesses and perhaps it is time that think tanks, policy makers and MPs alike, realised who is actually is responsible for generating our GDP.

A bonus for me was I could brag about visiting Google's HQ at Central Saint Giles and met some great people.

Photographs from the conference

They're a little random and taken using my phone, so quality isn't amazing but gives you a flavour of the day. 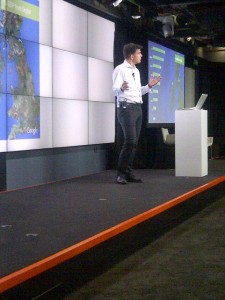 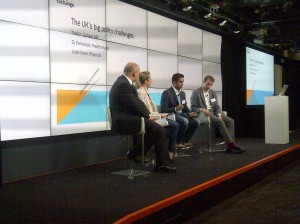 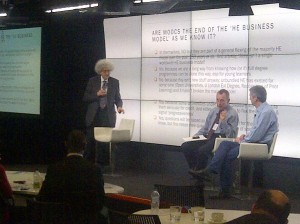 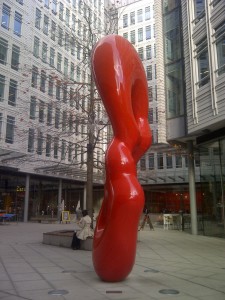 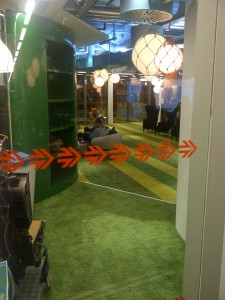 Policy Exchange
Bits and Billions: A blueprint for high-impact digital entrepreneurship in the UK
Bits and billions?(PDF)